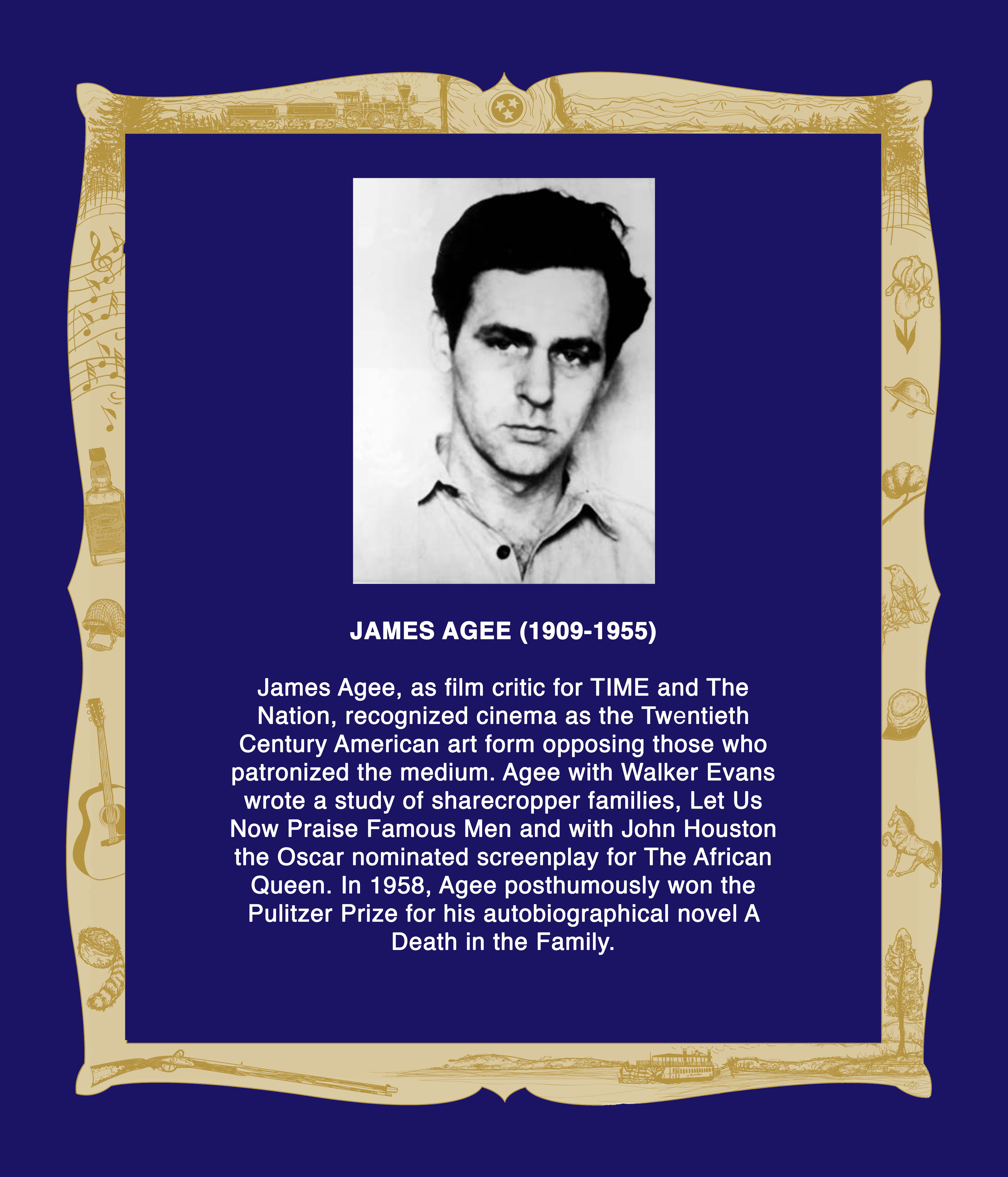 James R. Agee was born in Knoxville on November 27, 1909. His father, Hugh James Agee, was of southern Appalachian yeoman background; his mother, Laura Tyler, came from a family of means and education. The couple also had a younger child, a daughter, Emma. When the boy was six, his father was killed in an automobile accident. Shortly before his tenth birthday, Agee was enrolled in the St. Andrew's boarding school for boys, which was run and staffed by the Episcopalian monastic Order of the Holy Cross near Sewanee. It was there that Agee got to know Father James Harold Flye, a priest and teacher--their many letters would eventually see the light of day. Agee stayed at St. Andrew's until 1924. His mother had taken a house close by, but that year she returned to Knoxville because of her father's failing health, and so her son attended high school there during the school year of 1924-25, after which he was sent to Phillips Exeter Academy in New Hampshire.

While at Exeter, Agee began his writing career in earnest. He published fiction, poetry, and book reviews in the school's literary magazine, The Monthly. Soon enough he was at Harvard (1928), where he wrote for The Advocate--again publishing fiction, poetry, and essays. He became president of The Advocate in 1931, graduated in 1932, and thereafter became a reporter, then staff writer, for Fortune magazine, where between 1932 and 1936 he wrote major pieces on a broad range of subjects including "Housing," "Sheep and Shuttleworths," "Strawberries," "Steel Rails," "Cockfighting," "U.S. Ambassadors," "The American Roadside," "Drought," "Williamsburg Restored," and not least, "T.V.A." The latter was an important matter to him, one that required that he return to his native state in an effort to understand the (then) hugely ambitious (and controversial) attempt to gain control of the mighty and sometimes aberrant Tennessee River.

Meanwhile, in 1933, he married Olivia Saunders, whom he had met as a Harvard undergraduate. In 1934 his poetry, which he had been publishing since his Exeter years, was collected under the title Permit Me Voyage (Hart Crane's phrase) and published by Yale Press. He was given the Yale Younger Poets award, a most auspicious and distinguished beginning for a twenty-five-year-old man.

In 1936 Fortune commissioned Agee and his photographer friend Walker Evans to do a major study of the rural South's agricultural life--a landmark assignment that would change the very nature of his personal and writing life. In Hale County, Alabama, the two men lived with white tenant farm families and observed carefully their way of life, the work they did, and the manner in which they spent their time. Agee never would do justice to that experience as a writer for Fortune. Instead, he devoted himself to a prolonged literary and documentary "study" of the three families he had come to know best. The result, in the autumn of 1940, was Let Us Now Praise Famous Men, an idiosyncratic masterpiece that willfully defies description or categorization. It is a great, sprawling, lyrical, provocative, immensely edifying, soulful, and engaging celebration of humble but worthy farm folk, and too, a mix of social reportage, a narrative rendering of a particular human landscape, moral introspection, spiritual yearning. The book's appearance was untimely--the nation was by then turning its attention away from its social and economic problems in favor of its possible international role in a European war whose stakes were by then high, indeed. The book, too, was stubbornly, at times fiercely sui generis, and so a real challenge to reviewers who were limited by the demands of their work and the confines of the space allotted them. Soon enough the book was out of print, a financial failure for its publisher, Houghton Mifflin.

In 1939 Agee had embarked upon his second marriage, to Alma Mailman; their son Joel Agee (now a writer of both fiction and nonfiction) was born a year later. Agee began writing (unsigned) book reviews around 1941 for Time, and in 1942 he began writing signed film reviews for The Nation. He quickly became a much respected authority on the movies. His generous spirit, keen eye for detail, fluent writing, wonderful sense of humor, and knowing mastery of the techniques that enabled a good "moving picture" earned him a wide, devoted audience of readers.

After the war, in 1946, he entered into a third and final marriage, to Mia Fritsch, which would produce two daughters, Julia and Andrea, and a second son, John. During those last years of the 1940s he moved from writing about film to the writing of film scripts. He wrote the commentary for Helen Levitt's film about a troubled Harlem boy, The Quiet One, and wrote scripts for The Blue Hotel and The Bride Comes to Yellow Sky (both movies based on Stephen Crane stories). He also worked with John Huston on the script for The African Queen.

In the early 1950s he published The Morning Watch--another return to Tennessee: the story of a boy's unfolding adolescence, his awakening to the world, to his body. He did two more film scripts, one for Noa-Noa, based on Paul Gauguin's diary, and another for The Night of the Hunter. By the middle of the decade, years of heavy smoking, heavy drinking, all-night bouts of exuberant conversations in Manhattan bars, restaurants, apartments--a life lived intensely, sometimes recklessly--had worn down his once tall and powerful body. He developed coronary heart disease, suffered repeated bouts of angina, and on May 16, 1955 (the same day his father was killed, thirty-nine years earlier), he died in a taxicab on his way to see his physician at Manhattan's New York Hospital. At the time he had been completing a novel, A Death in the Family, published posthumously in 1957, which won the Pulitzer Prize and was eventually turned into a successful Broadway play, All the Way Home. The novel turned out to be James Agee's final "visit" to his native Tennessee--the reader is told, in hauntingly evocative prose, of a young boy's loss of his father. The Knoxville of this century's second decade is poignantly, suggestively evoked, and as in Dickens's David Copperfield, family loss, in all its melancholy and perplexity, is chronicled through a child's eyes and ears, his mind and heart and soul. A forty-five-year-old novelist's voice became, finally, one which (calling upon an experience of early sorrow in Tennessee) would teach people across the nation and abroad how the young come to terms with life's disappointments, tragedies, and turmoil.