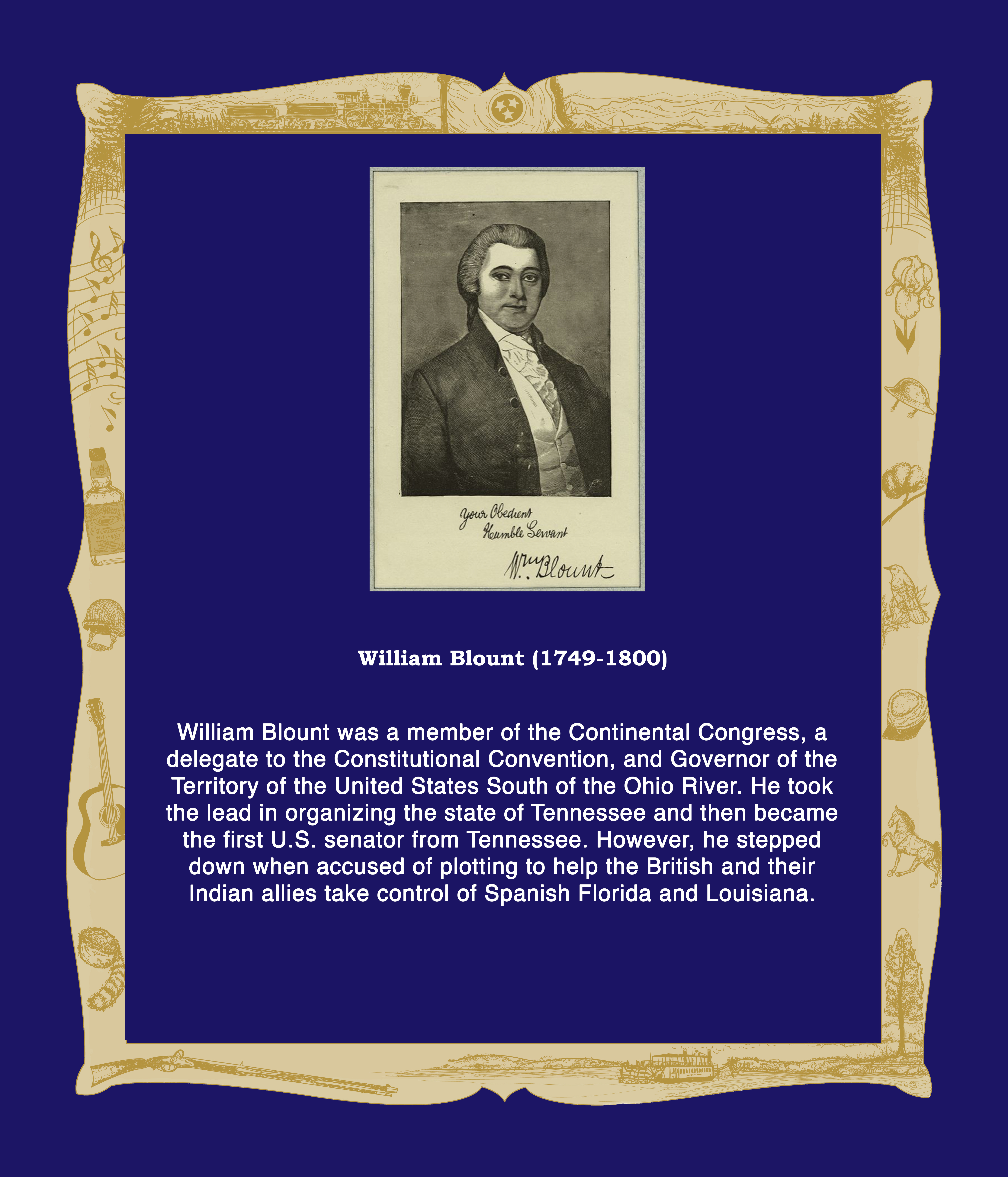 Territorial Governor and U.S. Senator William Blount was born on Easter Sunday (March 26, 1749, the eldest child of Jacob and Barbara Gray Blount of Bertie County, North Carolina. As a lad, Blount received informal training in commerce at the side of his father, who operated a farm and a mill and sold tar and turpentine. With maturity, Blount assumed a more active role in his father's businesses. Blount's business acumen gained respect, and in 1776 he was named paymaster of the Third North Carolina battalion of the continental troops.

At the age of thirty-one Blount entered politics when he won election as New Bern's representative to the North Carolina House of Commons; He assumed his post in late January 1781. Within a year he was elected to the Continental Congress, an office he held for approximately one year before returning to the North Carolina legislature. Blount's local legislative efforts reflected his growing interest in the western lands. He successfully promoted a bill to provide land grants west of the mountains to North Carolina soldiers with two years military service. Since most soldiers sold their grants instead of moving west, Blount and others-including his friend John sevier-seized the moment and purchased grants representing hundreds of thousands of acres.
In October 1784 Blount was reelected to the North Carolina legislature and subsequently won and internal vote for Speaker of the House. In December 1785 he was elected to the Continental Congress, where he served briefly.

In February 1790 North Carolina ceded its western land holdings to the United States. A few months later the area became the newly created territory of the United States South of the River Ohio (the Southwest Territory). President George Washington appointed Blount territorial governor and Superintendent of Indian Affairs for the Souther Department. Without a public building in which to conduct the affairs of the territory, Blount selected Rocky Mount, the spacious home of William Cobb at the fork of the Holston and Watauga Rivers, as his temporary capitol. The room Blount selected for his office had windows and a fireplace affording him a location from which to conduct business in comfort and style.

Relations between Indians and settlers represented the most pressing problem in the new territory. Blount invited representatives of the tribes to meet with him and negotiate treaties, a time-consuming effort that initially produced favorable results for the settlers. The treaties soon failed, undercut by settlers moving beyond treaty boundaries and by hostile responses from various Indian groups. Native Americans complained that once the treaties were translated for formal viewing, promises had been altered to their disadvantage.
Disappointment soon gave way to aggression. Blount found himself in the precarious position of trying to appease two groups with opposing interests. On the one hand, the settlers of the territory demanded a military campaign to extinguish the hostilities directed against them while federal officials urged restraint and prohibited retaliation. In the summer of 1794 settlers launched an unauthorized attack on the Chickamauga towns at Nickajack and Running Water. The attack further strained the relationship between Blount and his superiors in the federal government.

Blount's most lasting achievement was Tennessee statehood. He called a meeting of the territorial legislature in June 1795 to request a referendum for statehood. The request was favorably received, and the referendum submitted to he voters. When the people approved the statehood proposal, Blount sought and won a bid to represent the new state in the U.S. Senate.
As a senator Blount became involved in a risky plan initiated by John Chisholm to attack Spanish Florida with the aid of British and Indian allies. Blount later claimed that his motives were pure, arguing for the necessity of the action to keep western land open for future expansion. When his alleged involvement became public news, his participation as an American official in a plot against another country created a considerable stir. A Senatae committee called for his expulsion, and impeachment proceedings began soon thereafter Blount returned to Tennessee and avoided the avoided embarrassment of being formally removed from office.

The episode did little to dampen support for Blount in Tennessee. In 1798 he successfully ran for seat in the state Senate to represent citizens of Knoxville. Two years later, on March 15, 1800, while sitting on his porch reading, Blount complained of a chill. His discomfort gradually increased and led to more serious complications. Six days later he died.