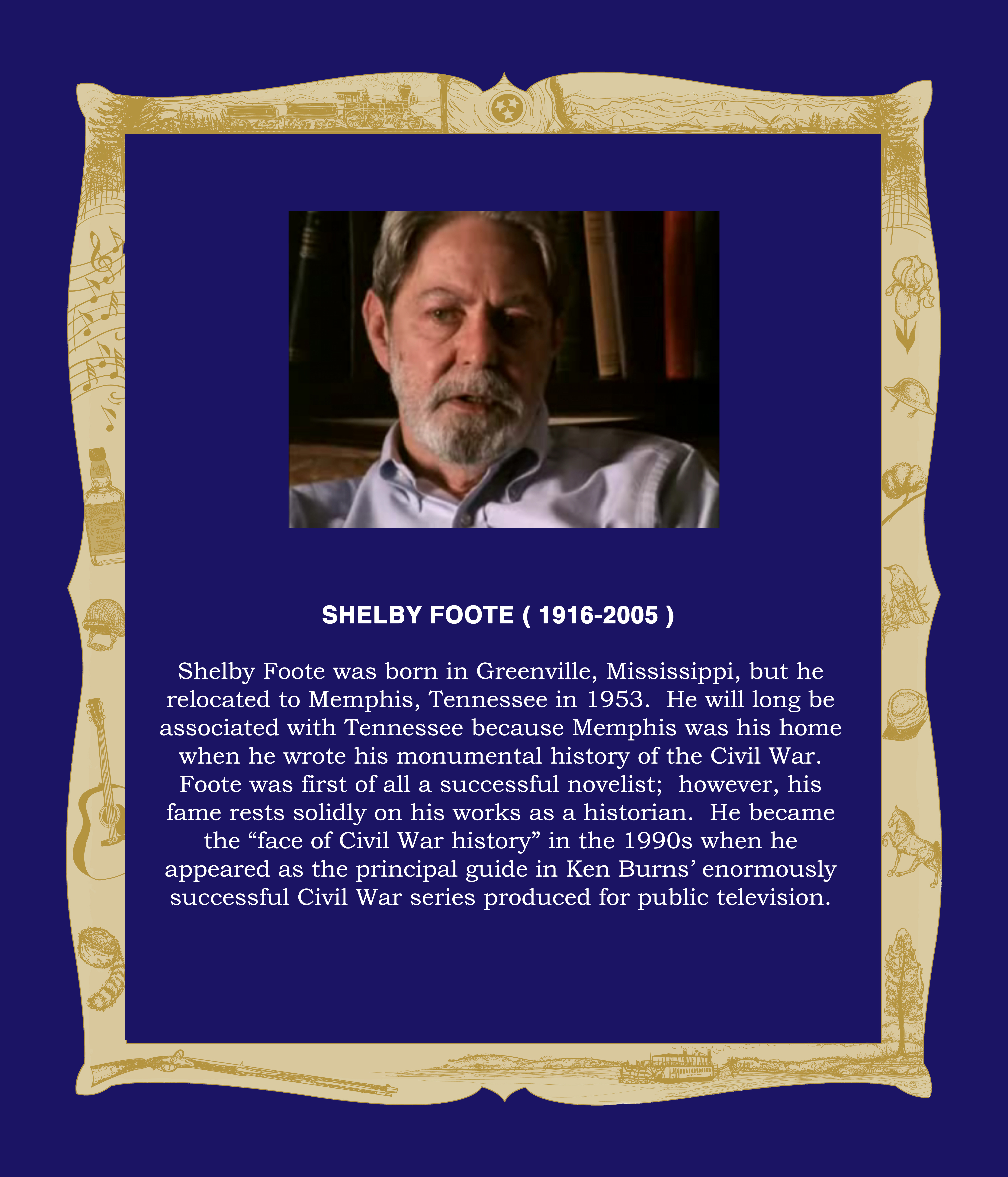 Novelist and historian Shelby Foote was born in Greenville, Mississippi, the only son of Shelby Dade and Lillian Rosenstock Foote. Foote grew up in the Delta town, where he was influenced by William Alexander Percy, a local author and the uncle of Walker Percy, who later became a successful novelist himself.

In 1935 Foote enrolled at the University of North Carolina at Chapel Hill but left in 1937 without taking a degree. After service in World War II he held various jobs, working construction, writing radio copy, and reporting for the Delta Democrat-Times. Foote had begun his first novel, Tournament, before the war, but did not complete it until 1949. During the next five years, he published four novels: Follow Me Down (1950), Love in a Dry Season (1951), Shiloh (1952), and Jordan County (1954). These novels, with the exception of Shiloh, which chronicles the famous battle, are set in and around Bristol, a mythical Delta town.

In December 1953 Foote left Greenville permanently to settle in Memphis, where he had often traveled for research and where he began the monumental history of the Civil War on which his reputation rests. The Civil War: A Narrative, consisting of Fort Sumter to Perryville (1958), Fredericksburg to Meridian (1963), and Red River to Appomattox (1974), was widely praised for enticing readers into the sectional conflict with its vivid imagery and strong characterization.After devoting twenty years to the Civil War histories, Foote returned to fiction with September, September (1978), in which a group of whites plots to kidnap an African American child for ransom. Set in his adoptive city of Memphis, the drama takes place during a thirty-day period in 1957 and is played against the background of white resistance to racial integration in Little Rock, Arkansas. Foote next embarked on another character study set in the Mississippi Delta during the 1940s. Tentatively titled "Two Gates to the City," this work in progress is still unfinished.

Millions of Americans "discovered" Shelby Foote in the fall of 1990, when he appeared as the principal guide in the hugely successful Civil War series that was produced for public television by the documentary filmmaker Ken Burns. Foote enlivened the show's eloquent still photographs with a storehouse of poignant anecdotes, becoming for many viewers the personification of the war itself.

Shelby Foote has been called the greatest living Civil War historian. He career began as a novelist, and his powerful works of fiction rose out of his closeness to the life and culture of his native region, the Mississippi Delta country. Later in his career he transformed modern historical prose by using his keen sense of the novel. His artistic distance from the elements of regionalism that lies at the heart both of his novels and his history writing gives his prose great narrative force and energy.