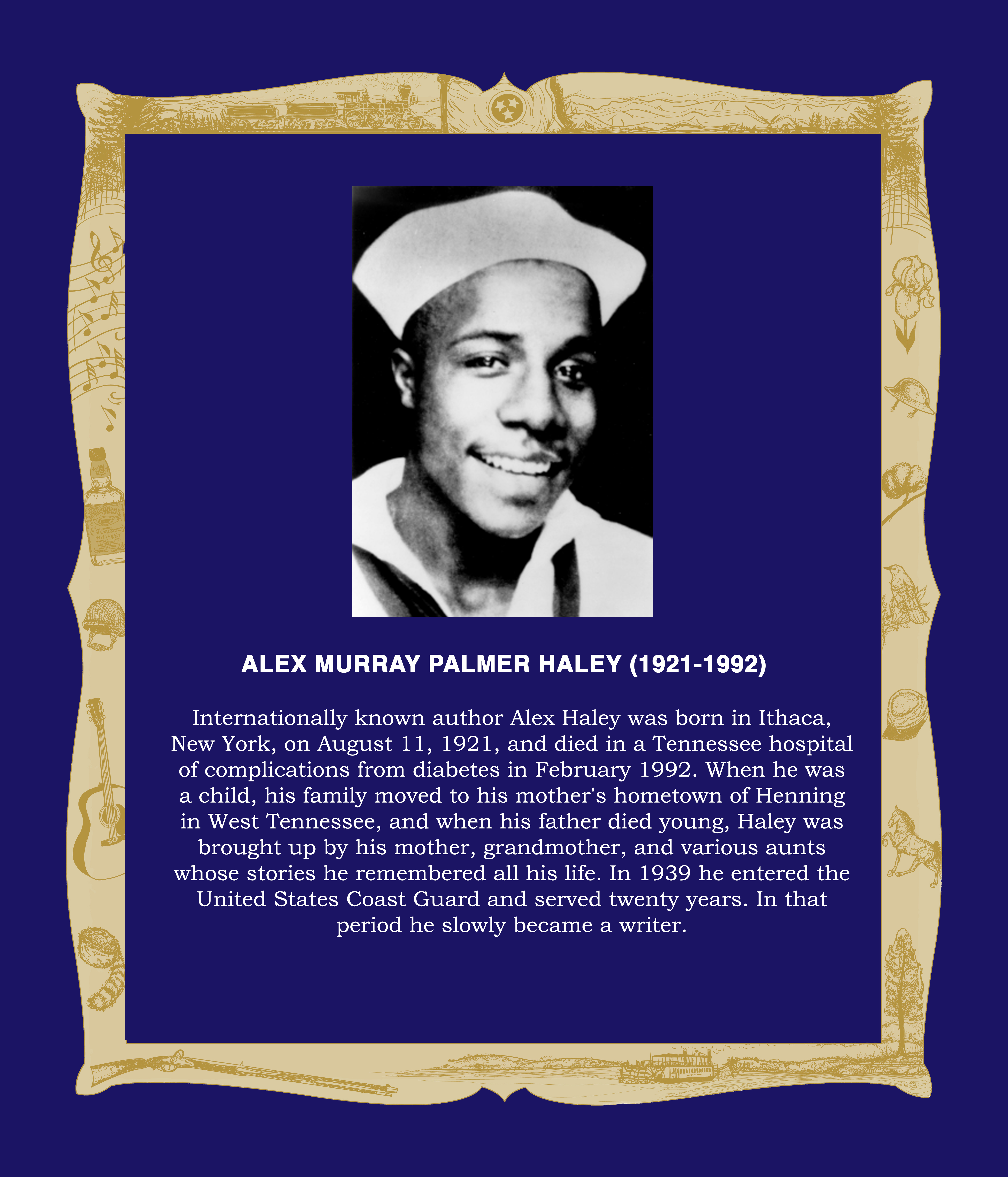 His literary fame rests on two best-selling books: The Autobiography of Malcolm X (1964) and Roots (1976). Roots sold 1.5 million copies in hardback in the United States. Within two years after its publication it had been translated into twenty-six languages and had sold 8,500,000 copies. The television miniseries of Roots, broadcast for a total of twelve hours on eight consecutive nights in January 1977, became a national event. Roots won the Pulitzer Prize, and the TV adaptation won 145 awards, including nine Emmys.

Haley became an adored national figure, enthralling college audiences with the thrilling story of how he had written his masterwork. He ambled to the platform always with an air of becoming modesty. He faced his audience with a genial reserve, and he spoke in a conversational baritone, reeling off stories of his childhood, of women rocking on a front porch, the sound of their rockers going "thump-thump" as they mused over the oral history of their ancestors. Especially the older women remembered tales of an African named Toby who insisted that his real name was Kin-te.

In Roots Haley told of visiting the British Museum on an assignment for Reader's Digest and seeing the Rosetta Stone that had opened the way to translation of ancient Egyptian hieroglyphics. He remembered the many k sounds in the stories about Kin-te, and he wondered if he might use them as a key to the discovery of his own ancestors.

On a trip to Gambia Haley met a griot, an elder supposedly able to recall in remarkable detail the oral history of the tribe. From the griot Haley heard the story of his ancestor Kunta Kinte, captured by slave traders and not seen again. Haley claimed he had discovered that Kunta was shipped to America in 1767, brought ashore at Annapolis, Maryland, and sold to a plantation owner in Virginia. He said that further painstaking research provided a remarkably complete story of his ancestors. That story became Roots. It appeared in 1976, the bicentennial year, and Haley dedicated it "as a birthday offering to my country within which most of Roots happened.”

Doubleday marketed the book as "non-fiction," and Haley claimed steadfastly that the facts had come out of his research. But the book is clearly cast in the form of a novel with dialogue, thoughts, and acts that could not have come from a historical source. From the beginning Roots was subjected to harsh criticism by historians who found in it numerous errors. But it quickly became required reading in college courses all over America. Literary critics noted its clunky style and its clichés and stereotypes of both whites and blacks.

Behind the national enthusiasm, Haley had troubles. He was sued twice for plagiarism. One case was summarily dismissed, but the other, brought in 1978 by a white specialist in African folklore, Harold Courlander, went to trial. Haley said under oath that he had never read Courlander's novel, The African, published in 1967. Haley claimed that eighty-one parallel passages in Roots and Courlander's work came from notes intended to be helpful and received from audiences at his lectures. Judge Robert Ward later told Village Voice writer Philip Nobile that he would have ruled against Haley and that he considered charging him with perjury. But on the eve of Judge Ward's decision, Haley agreed to pay Courlander $650,000, and the case was immediately closed.

Attacks on Roots continued while Haley lived extravagantly. When he died in 1992, he was $1.5 million in debt, and his reputation among serious scholars was in ruins. In February 1993 Nobile's long and measured article in the Village Voice was a devastating final shot. Nobile examined the Haley papers deposited at the University of Tennessee, Knoxville, and interviewed a multitude of people connected to the book. One by one Haley's stories collapsed under Nobile's scrutiny. He concludes the article: "Beyond the plagiarism and the massive perjury to cover it up, Roots as Haley well knew was a hoax, a literary painted bird, a Piltdown of genealogy, a pyramid of bogus research."

Saddest of all, the story of the griot who allegedly told Haley about Kunta Kinte appears to have been arranged by a collusion between Haley and authorities in Gambia who knew a prospective tourist attraction when they saw one. Haley told them what he needed; they produced the stereotypical old man who, through an interpreter, gave him what he required. A tape of the interview does not resemble Haley's account of the meeting in Roots.

Even Haley's authorship is suspect. The manuscript evidence demonstrates that Murray Fisher, Haley's editor at Playboy, rewrote huge parts of it, not merely revising Haley's prose but cutting it out altogether.

No one answered Nobile's attack. In a long article in Critical Quarterly, Helen Taylor tries to redeem Haley in part, but she does not doubt that he lied habitually. She notes that Haley remained popular with audiences to the end. But among scholars, especially black critics, he is ignored. She declares, somewhat sadly, "None of the major African American literary critics--Henry Louis Gates, Jr., Houston A. Baker, Jr., Toni Morrison, bell hooks, or Hazel V. Carby--even cites the man, book, or phenomenon." She calls Roots an "autobiography" that like much black autobiography tells a story of community, bondage, flight, and freedom, a tale intended to be didactic and inspirational. Haley came as close to anyone, she says, of becoming the American griot, the custodian of the black community's oral history in America.

It may be more accurate to see Haley, as Nobile suggests, as a writer who created a fictional life for himself and could not escape it once the public had rewarded him so handsomely. Had Roots been marketed as the novel it is, and had Haley not spun tall tales about his agonizing "research," the book would retain an honorable place in southern literature. It is no more inaccurate than William Styron's The Confessions of Nat Turner. As it is, however, it will always be suspect.

No doubt that during an important period in our history, Roots helped give white Americans sympathy for what black Americans had suffered in bondage. Unfortunately, the book will be remembered as a phenomenon of popular culture rather than as a serious and enduring study of black history.