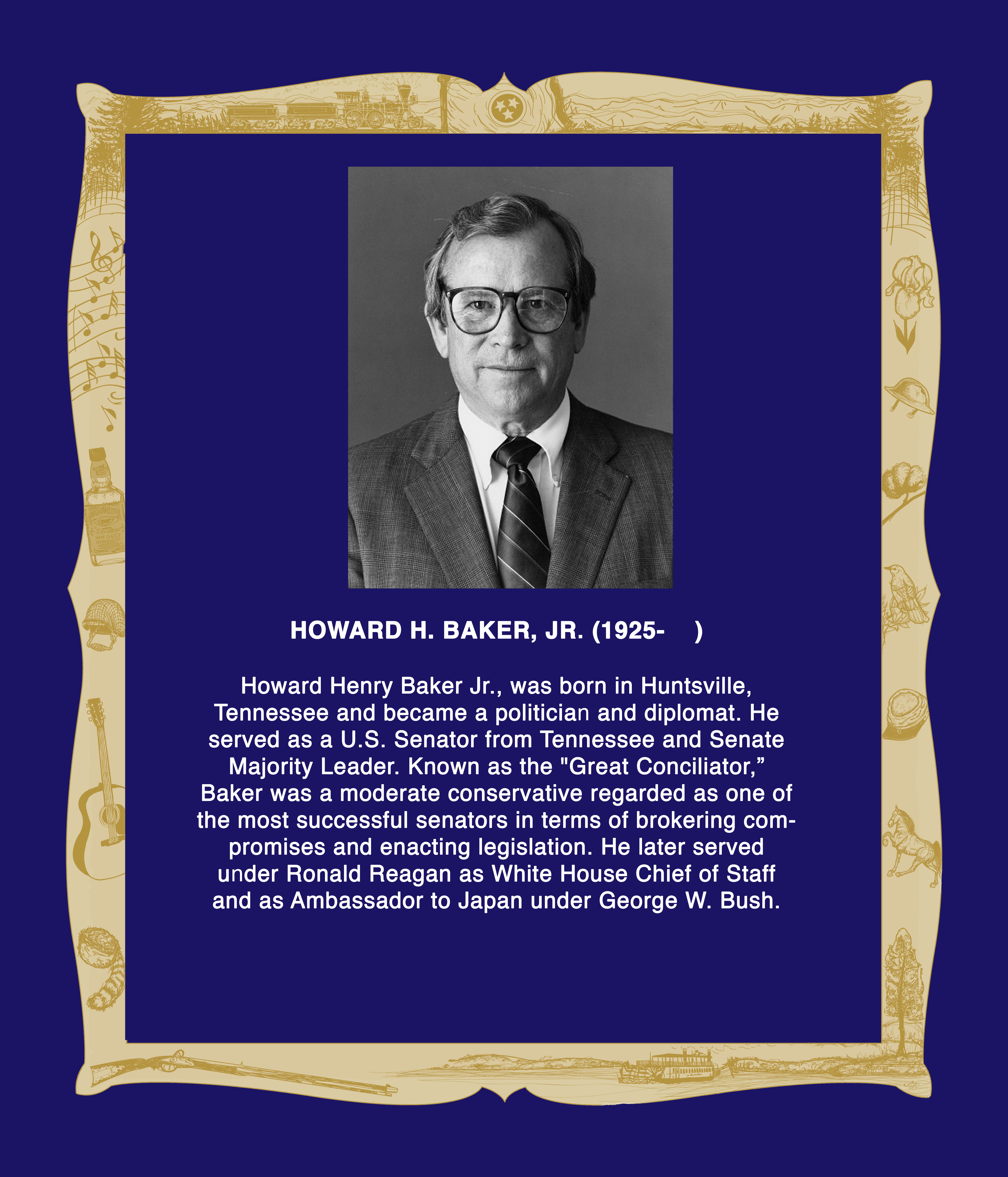 ×
By Michael Rogers , University of Tennessee

Howard H. Baker Jr., U.S. senator, Senate minority leader and majority leader, and White House chief of staff, was born in Huntsville in Scott County on November 15, 1925, the son of future congressman Howard Baker Sr. and his wife Dora Ladd Baker. He attended the University of the South, Tulane University, and the University of Tennessee, where he was the 1949 student body president. He also received his law degree from the University of Tennessee. World War II and his service as a lieutenant and PT boat officer in the U.S. Navy in the South Pacific interrupted his college studies. Baker married Joy Dirksen, the daughter of U.S. Senator Everett Dirksen of Illinois, in December 1951.

Baker's Scott County legal practice flourished. In 1959, while representing the Stearns Coal and Lumber Company, Baker won a one-million-dollar judgment from the United Mine Workers for their use of violence and sabotage to disrupt Stearns's contract with a rival union. After his father's death in January 1964, Baker turned to politics. That November, as the Republican nominee, he lost to Democrat Ross Bass in a race to fill the unexpired U.S. Senate term of the deceased Estes Kefauver. Baker, however, ran a very strong campaign, and two years later he easily defeated former governor Frank Clement in a second bid for the Senate. Baker was the first popularly elected GOP senator in Tennessee history and the first Republican to win a statewide election since 1920.

Baker proved himself a moderate conservative in Congress, urging the Nixon administration to implement a revenue sharing program with the states. In 1972 Baker won reelection by carrying all three of the state's grand divisions and defeating Democrat Ray Blanton. He even received considerable support from the black community at a time when many African Americans had abandoned all ties with the Republican Party.

Baker served as Republican leader and vice-chairman of the 1973-74 Senate Watergate Committee, asking the pivotal question, "What did the President know, and when did he know it?" Baker's performance in the hearings brought national attention, and he received praise from both sides of the political spectrum as a fair and thoughtful legislative leader. In 1976 Baker considered a run for the presidency but withdrew his bid when incumbent Gerald Ford decided to seek the nomination. Baker gave the keynote speech at the 1976 Republican national convention. In 1977 he was elected Senate minority leader, and in 1980 after a failed presidential campaign bid, he became the Senate majority leader in the wake of the Reagan landslide. As majority leader, Baker was very popular on both sides of the aisle, with many of his strongest boosters among the Democratic senators.

In 1985 Baker retired from the Senate amid speculation that he would be a candidate for the presidency in 1988. However, during the midst of the Iran-Contra controversy in 1987, Baker accepted an offer from President Ronald Reagan to be White House Chief of Staff. The appointment of Baker instantly restored much credibility to the administration. Six months before Reagan left the White House in 1988, Baker resigned to be with his critically ill wife Joy, who died shortly thereafter of cancer. In 1996 Baker married former Kansas Senator Nancy Kassebaum.

Since leaving the public arena, Baker has maintained an active life. His law practice, Baker, Donelson, Bearman, and Caldwell, is among the state's largest firms, with offices in Knoxville, Nashville, Jackson, Mississippi, and Washington, D.C. Baker has served on the boards of directors of several corporations including Federal Express, United Technology, and Pennzoil. His principal hobby is photography, and he has taken particular interest in the outdoor recreational activities of his native state. In 1993 Baker authored an article for the National Geographic magazine on the Cumberland River's Big South Fork National Recreation Area, which had been developed under legislation sponsored by him. Most recently, Baker was active in the failed 1996 presidential campaign bid of his former political protégé, Lamar Alexander.