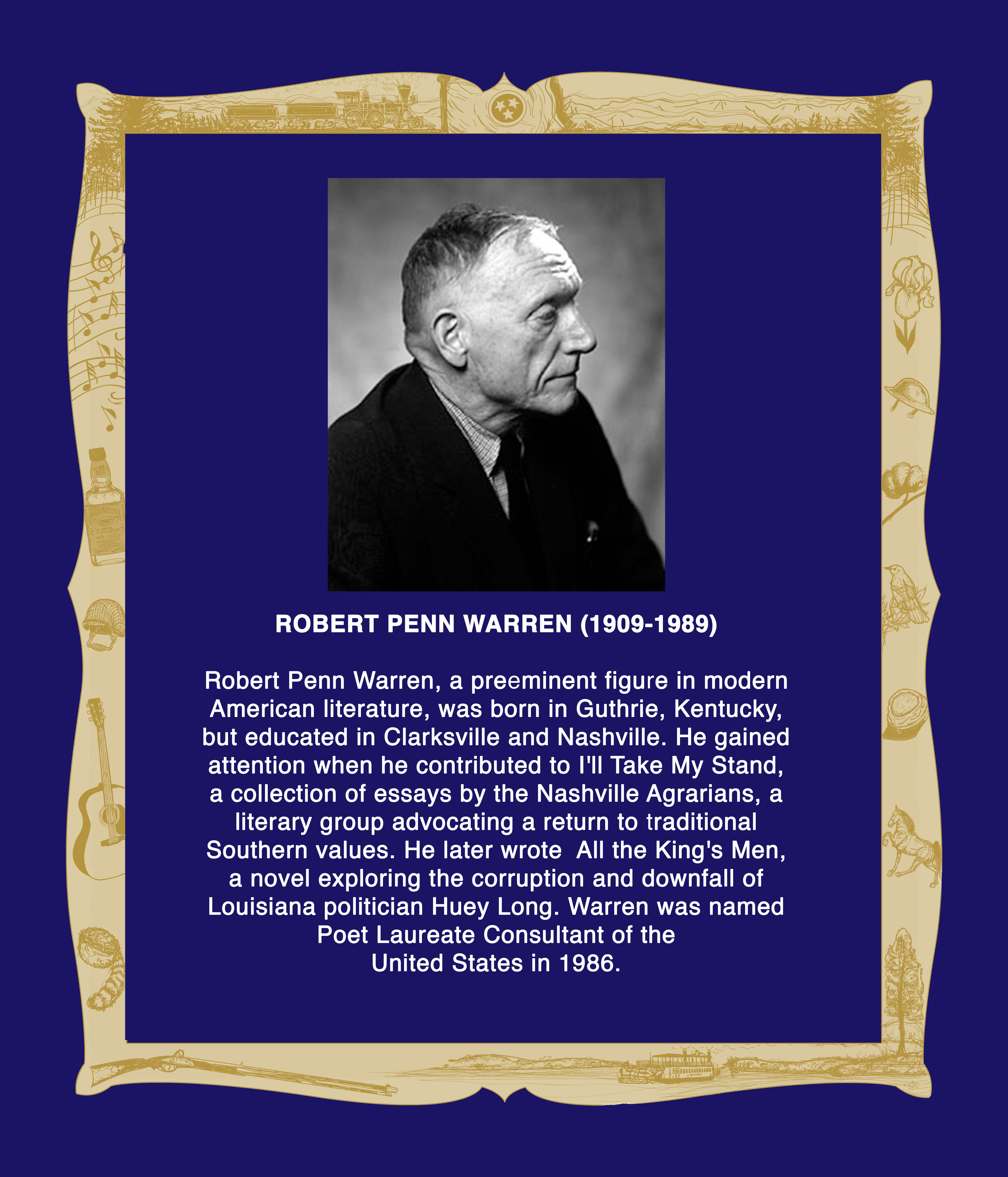 Acclaimed modern American writer Robert Penn Warren was at home in all the major genres--poetry, fiction, drama, and criticism--though poetry was his dominant mode. Warren was awarded three Pulitzer Prizes, a number unmatched by any other writer: one for his novel All The King's Men (1947) and two for the poetry collections Promises (1958) and Now and Then (1978). He also received a MacArthur Prize Fellowship in 1981. The American Academy and Institute of Arts and Letters awarded him its Gold Medal for Poetry in 1985. In 1986 he was named poet laureate, the first in the United States to be given that title.

Warren was born in Guthrie, Kentucky, across the Tennessee state line, and educated in public schools, graduating from Clarksville high school in 1921. He entered Vanderbilt University in 1921 and was adopted by the Fugitive Poets at the peak of their critical intensity. That year they began publication of The Fugitive, a magazine of verse, which ran for nineteen issues through 1925. Allen Tate, Warren's roommate and lifelong friend, sponsored and encouraged him in the creative climate. Warren contributed poems to The Fugitive as well as an essay to the 1930 Agrarian symposium I'll Take My Stand.

His education continued through an M.A. degree at the University of California in 1927 and B.Litt. in 1930 from New College at Oxford University, where he studied as a Rhodes scholar. He taught at Vanderbilt from 1931 to 1934 before accepting a position at Louisiana State University. There he began a lifelong collaboration with Cleanth Brooks, first on the Southern Review, a literary journal, then on the influential texts Understanding Poetry and Understanding Fiction. Altogether, they shared authorship of eight texts that revolutionized the teaching of literature in the twentieth century.

During the 1940s Warren taught at the University of Minnesota. His twenty-year marriage to Cinina Brescia ended with divorce in 1951. In 1952 he and writer Eleanor Phelps Clark married. With their children, Rosanna Phelps and Gabriel Penn Warren, they traveled extensively, dividing their time between Europe and New England. Warren joined Brooks at Yale in 1950 and held various appointments until his retirement in 1973.

"Prophecy," Warren's first published poem, appeared in the Camp Knox publication The Mess Kit in 1921 while he was participating in a summer training program. His last collection, New and Selected Poems, 1923-1985, was published in 1985. Over a period of more than sixty years, during which he produced fifteen volumes of collected poems in addition to verse drama and numerous individual publications, his poetic impulse was rarely absent.

All the King's Men, also produced as a play, an award-winning motion picture, and later as an opera, has had the greatest impact of his ten novels. Although very much of its era, the work offers powerful universal considerations of morality and modern tragedy. His last novel, A Place to Come To, draws most on Warren's Tennessee experiences and provides the setting of a formative period in his life. In addition to the eight works coauthored by Cleanth Brooks, Warren wrote more than fifteen analytical monographs ranging from studies of classics in the American canon to meditations on segregation and the place of poetry in the late twentieth century. Warren did much to establish that place. He died at his Vermont home on September 12, 1989.