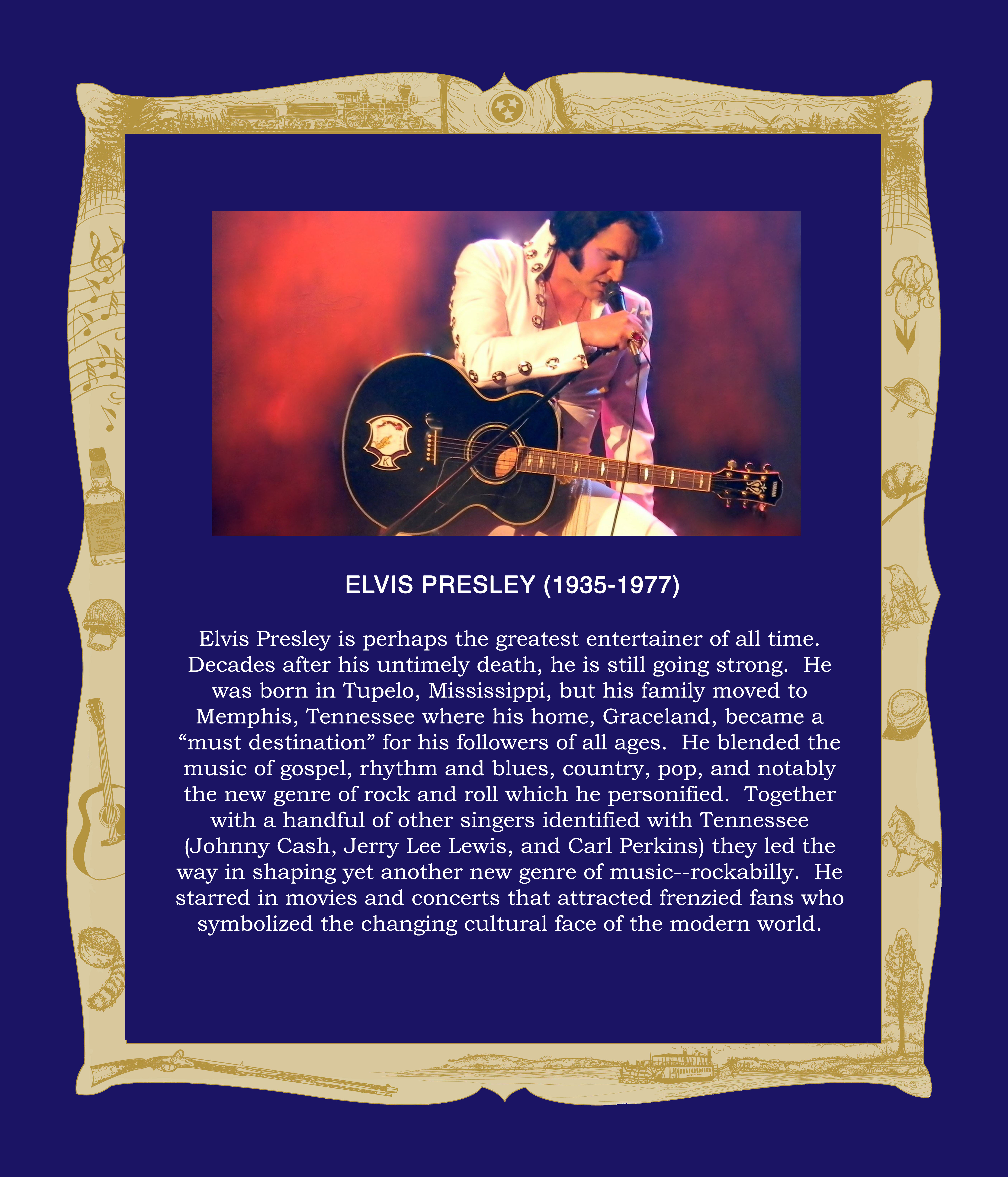 Elvis. The first name alone invokes images and sounds which spark instant recognition. While he may not have invented rock-n-roll, few can deny that Elvis Presley helped transform a musical fad into a national and international phenomenon. In the process, he became one of the most successful entertainers of the twentieth century and one of its most controversial cultural figures.

Presley was born into anonymity in Tupelo, Mississippi, on January 8, 1935. After years of struggle against dwindling economic opportunities and eroding status, Presley's working class family migrated to Memphis. In the West Tennessee metropolis, young Presley aspired to overcome his feelings of invisibility. Inspired by movie stars and entertainers, he developed a penchant for flashy clothes, slicked-back hair, and long sideburns. In his quest for identity, he also turned to radio and absorbed an eclectic assortment of musical styles: rhythm and blues, country, pop, and both black and white gospel. Presley eventually synthesized these various styles into what became known as rockabilly.

In 1954 Presley made his first recordings for Sam Phillips's Sun Records Company. He also joined the Louisiana Hayride in Shreveport and toured extensively throughout the South and Southwest. By the end of 1955, when he signed with RCA, Presley had become one of the hottest commodities in country music. Yet his new manager, the flamboyant Colonel Tom Parker, sought a larger and more diversified audience for his client. In 1956 Parker booked Presley onto several network television programs, the most famous being his appearance on The Ed Sullivan Show, which beamed the singer's charisma into the living rooms of millions of viewers. Presley's popularity skyrocketed. Following unprecedented record sales, Hollywood beckoned, and the singer became a movie idol in Love Me Tender. As his fame rose, furor over a black-derived and overtly sexual performance style mounted across the nation. The criticisms only heightened Presleymania. By 1958 he was the undisputed "King of Rock-n-Roll.”

Between 1956 and 1965 Presley dominated popular music. Even a stint in the army failed to stifle his popularity. After 1960 he devoted his energy almost exclusively to motion pictures. While the results did not bring him critical acclaim, he became one of the highest paid actors of the decade. Yet by the mid-1960s Presley's creativity and influence appeared irreversibly diminished. A highly successful television special in 1968, in which he returned to his blues roots, revived his career, and Presley returned to touring for the first time since the 1950s. To the astonishment of many, Presley recaptured the vitality that characterized his early career. After 1973, however, personal difficulties, including a failed marriage, health problems, and ballooning weight took a toll on the singer. On August 16, 1977, Presley died of heart failure and complications from drug use. A southern version of the Horatio Alger hero who challenged contemporary boundaries regarding music, sex, taste, race, and public behavior, Presley remains a significant key to understanding the region and era from which he emerged.