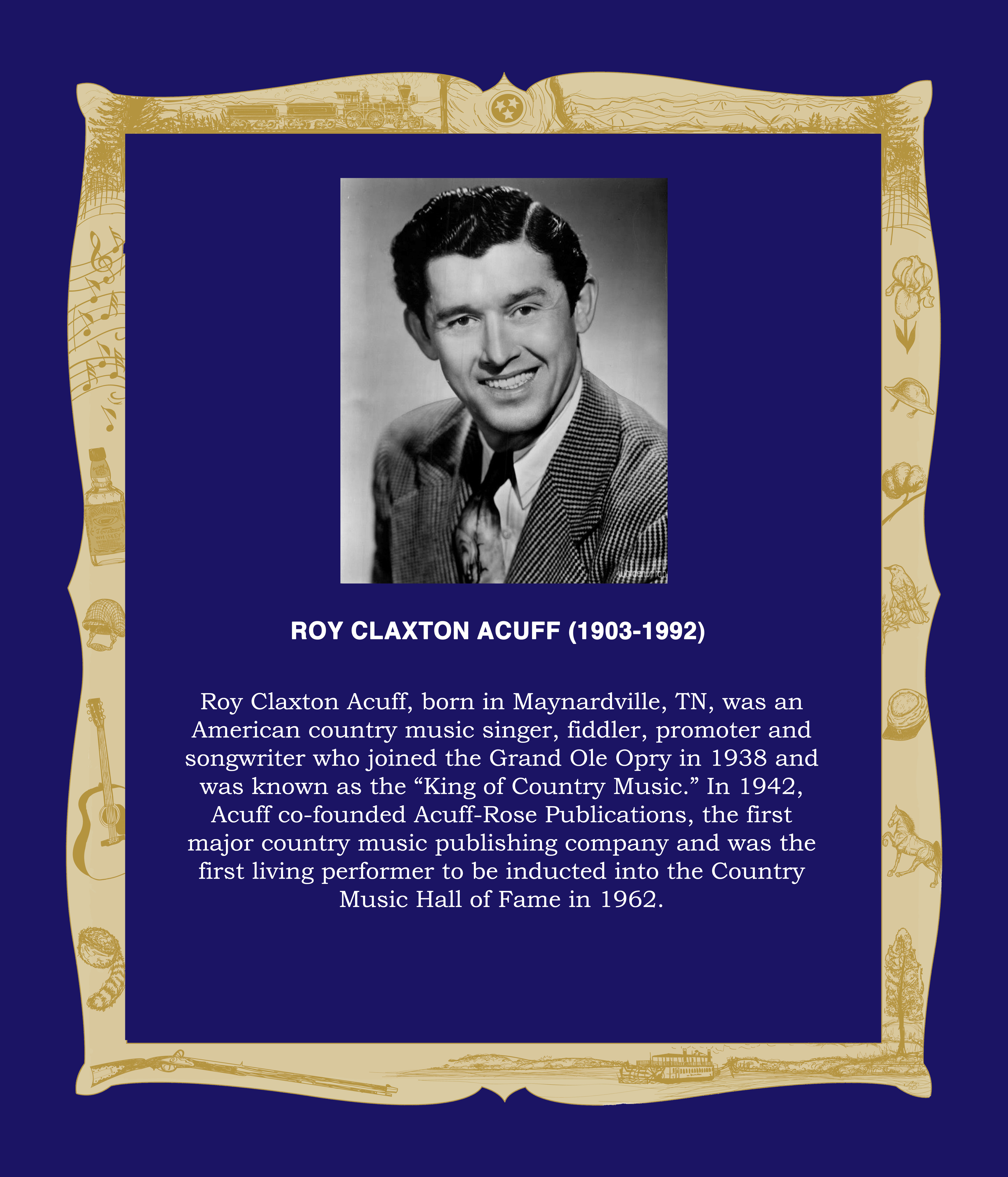 Roy Acuff, known as the "King of Country Music" due to his long association with the Grand Ole Opry, was born in Maynardville, Union County, on September 15, 1903. At age sixteen, he moved with his family to a Knoxville suburb. A good athlete, Acuff played baseball until felled by a sunstroke in 1929. While recuperating, he learned to play the fiddle his father owned. In 1932 he joined a medicine show selling Mocatan Tonic, and in 1934 he performed on WROL radio in Knoxville. He then moved to the Mid-Day Merry-Go-Round on station WNOX, but in 1935 returned to WROL, where his group acquired the name the "Crazy Tennesseans." Sometime during this period, Acuff began singing "The Great Speckled Bird," and it soon became so popular that the American Record Company (later Columbia) recorded Acuff and his group in Chicago in October 1936.

Since 1934 Judge George Hay had rebuffed Acuff's attempts to sing on the Grand Ole Opry. Acuff persisted in his efforts, though, and on February 5, 1938, he made his audition appearance on the Opry singing "The Great Speckled Bird." The Opry received a favorable mail response, and he was offered a regular spot on the show two weeks later. WSM general manager Harry Stone insisted, however, that the group change its name to the "Smoky Mountain Boys." Stone felt that "Crazy Tennesseans" might be interpreted as a slur against the state, and he wanted to avoid confusion with "Crazy Water Crystals," an advertiser for a popular laxative as well.

Acuff supplemented his income by compiling and selling songbooks of his songs, a venture that eventually led to the establishment of Acuff-Rose Publishing in October 1942. Acuff-Rose became a cornerstone for Nashville's growing music industry and the first successful business outside the Grand Ole Opry. During the 1940s, Acuff's hits included "Pins and Needles," "Beneath That Lonely Mound of Clay," "The Precious Jewel," "The Wreck on the Highway," "Fire Ball Mail," "Wait for That Light to Shine," "Two Different Worlds," and "The Wabash Cannonball.”

Acuff began hosting the "Prince Albert" segment of The Grand Ole Opry radio show in October 1939. The exposure on the NBC radio network broadcast made him a national star. In April 1946 Acuff left the Grand Ole Opry and the "Prince Albert" show, however, out of frustration with the Opry's requirement that he return every Saturday night to perform. Acuff's popularity kept him in constant demand for personal appearances at much higher fees than what the Opry paid. After leaving Nashville, Acuff toured the West Coast and appeared in seven movies. Red Foley, a smooth-voiced singer from WLS's National Barn Dance in Chicago, replaced Acuff on the Opry. Without regular network exposure, the demand for Acuff's appearances dwindled, and he returned to the Opry to reestablish himself as a major performer.

In 1948 Acuff became the Republican nominee for governor of Tennessee and won a large vote but lost the election. That same year, he opened his Dunbar Cave resort just outside Clarksville, where he performed regularly.

After the early 1950s, Acuff was no longer a major recording artist, though he continued to tour until he was involved in a near-fatal accident in 1965. In 1962 he became the first living artist elected to the Country Music Hall of Fame. Acuff gained recognition and appreciation from young fans after the Nitty Gritty Dirt Band recorded "Will the Circle Be Unbroken" in 1971. Acuff considered the opening of the new Opry House one of the highlights of his career. On that date, March 16, 1974, he performed with President Richard Nixon on the Opry stage.

After Acuff's wife Mildred died in 1981, the Opryland Music Group purchased Acuff-Rose Publishing, which was actually in her name. Roy Acuff spent his final years living in a home on the grounds of Opryland and performing on the Opry each weekend. The widely respected icon of country music died on November 23, 1992.