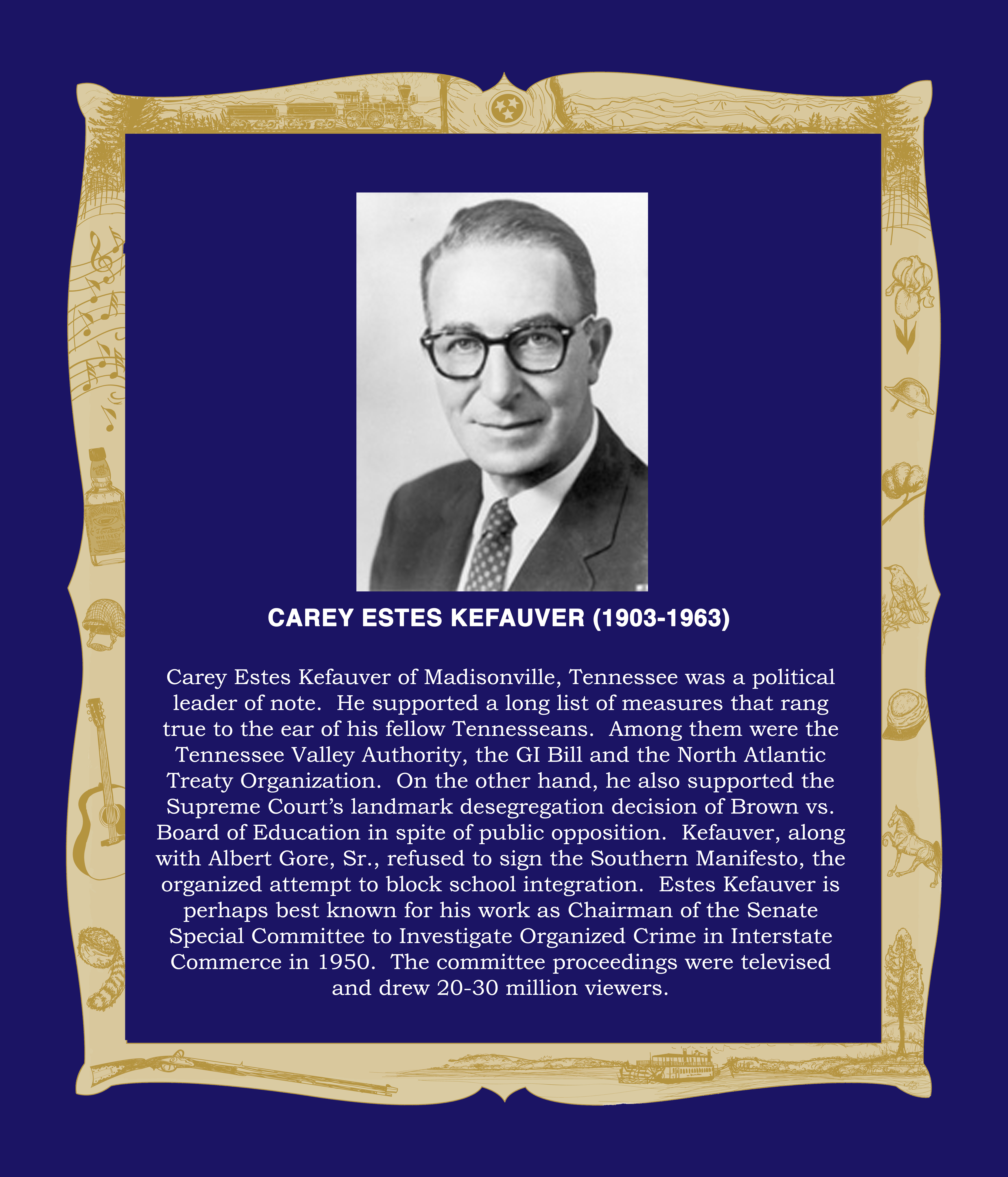 U.S. Congressman and Senator Estes Kefauver was the Democratic vice-presidential nominee in 1956. Kefauver was born in Madisonville and received his education at the University of Tennessee (1924) and Yale Law School (1927). He practiced law in Chattanooga (1927-39) and married Nancy Pigott, a native of Scotland, in 1935.

Kefauver won election to the U.S. House of Representatives in 1939 as a supporter of President Franklin Roosevelt and the Tennessee Valley Authority. In the House (1939-49), he served on the Judiciary Committee and the Select Committee on Small Business, advocated congressional reform and federal aid to education, and cosponsored the Kefauver-Celler Antitrust Act, the Legislative Reorganization Act of 1946, and the GI Bill of Rights. A defender of civil liberties, he voted for the abolition of the poll tax and against the Taft-Hartley Act, the House Un-American Activities Committee, and the Federal Employment Loyalty Program.

Kefauver's successful revolt in 1948 against E. H. Crump, whose political organization had controlled Tennessee for decades, was a watershed in Tennessee politics. In full-page advertisements in the state's major newspapers, Crump portrayed Kefauver as a furtive raccoon-like instrument of the communists. Using the ads to his advantage, Kefauver pulled on a coonskin cap during a speech in Memphis, Crump's stronghold, and retorted, "I may be a pet coon, but I'm not Boss Crump's pet coon." Kefauver won, and the coonskin cap became his trademark.

Kefauver rose to national prominence in 1950 as chairman of the Senate Special Committee to Investigate Organized Crime in Interstate Commerce, where he established a reputation as fair and thorough. Kefauver alienated key Democrats in urban machines who had alliances, or at least friendships, with crime figures. Among the first televised congressional inquiries in American history, his crime hearings attracted an estimated 20-30 million viewers and firmly established Kefauver in the public mind as a crusading crime-buster and opponent of political corruption. A popular choice among many Democrats for president in 1952 with victories in fourteen of seventeen presidential primaries, he lost in the convention to Adlai Stevenson. A similar fate awaited him four years later, though delegates in the 1956 convention bypassed Senator John F. Kennedy to nominate Kefauver as Adlai Stevenson's vice-presidential running mate.

Kefauver overcame substantial odds to win reelection to the Senate in 1954. Depicted as a traitor to the South because of his refusal to denounce the U.S. Supreme Court's landmark desegregation decision in Brown v. Board of Education (1954), Kefauver supported the Court's ruling as "the law of the land" and won with more than 68 percent of the vote, carrying all of Tennessee's congressional districts and losing only four of the state's ninety-five counties. In March 1956 Kefauver and Tennessee's other U.S. senator, Albert Gore Sr., were the only southern senators who refused to sign the Southern Manifesto, a demagogic anti-Brown statement of intent to block school integration. Kefauver voted for the Civil Rights Acts of 1957 and 1960. Overcoming strong segregationist opposition, he won a third Senate term in 1960 with 65 percent of the vote.

Kefauver assumed leadership roles in creating foreign and domestic policy at a pivotal time in American history. He supported American participation in the United Nations, the North Atlantic Treaty Organization (NATO), and the Atlantic Union. He chaired the American delegation to the Seventh Conference of NATO Parliamentarians in Paris in 1961 and cosponsored the Twenty-fourth Amendment abolishing the poll tax in federal elections. An early advocate of consumer protection, he tried to establish a cabinet-level Department of Consumers, pushed for the development of fuel efficient automobiles, and alerted the public to the dangers of such drugs as thalidomide. His exhaustive investigation of the pharmaceutical industry resulted in the Kefauver-Harris Drug Control Act of 1962.

Kefauver died after suffering a heart attack on the Senate floor. At his funeral, observed Wilma Dykeman in an August 18, 1963, story in the Knoxville News-Sentinel, there were thousands of "neighbors, fellow Tennesseans, commonplace people who appeared somehow more dignified, a little taller than usual"--those who had trusted Kefauver for leadership by voting for him, even when they disagreed with him. He was buried on the Kefauver family farm near Madisonville beneath a simple stone cross bearing the epitaph: "Courage, Justice, and Loving Kindness."