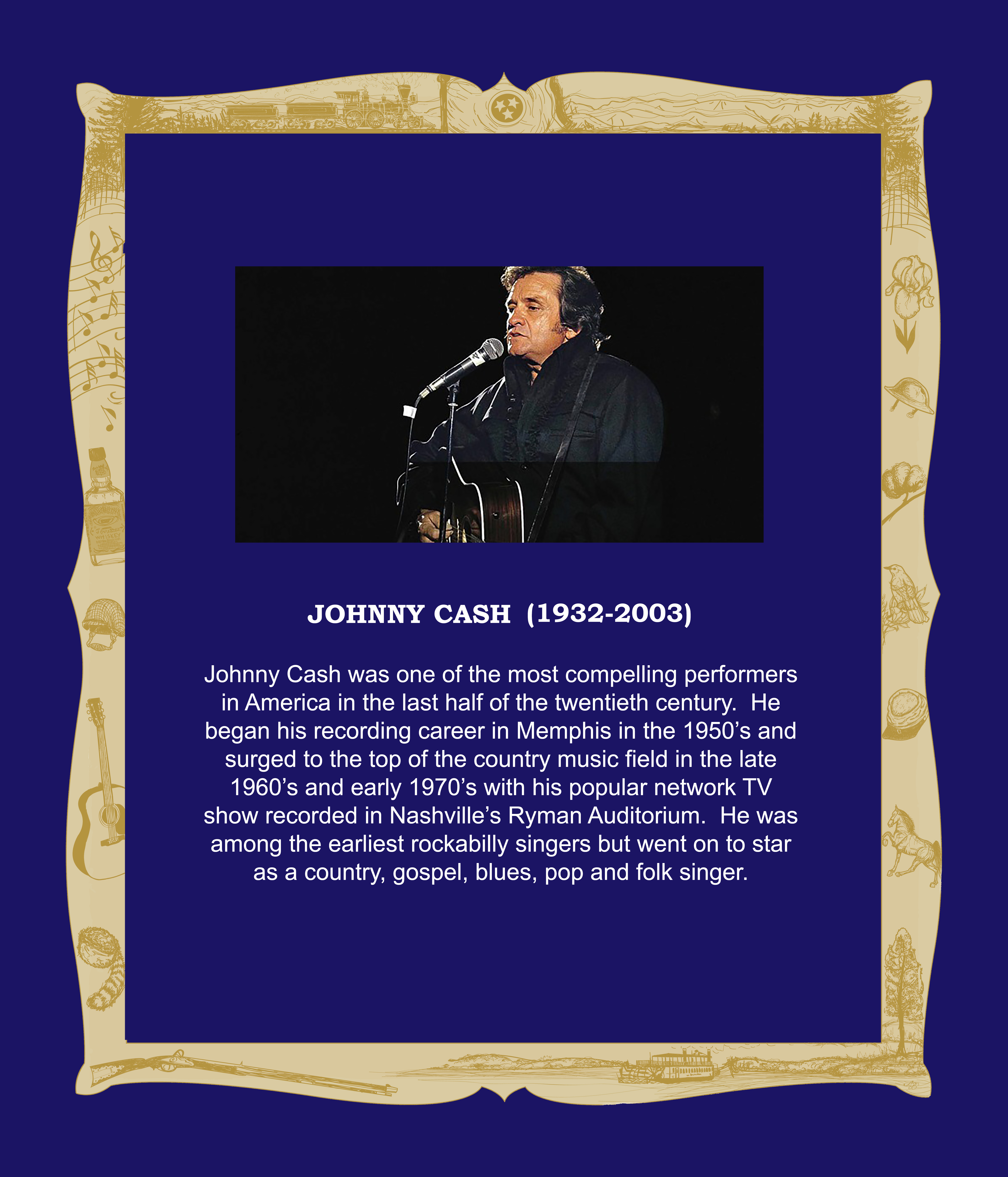 Johnny Cash was born J.R. Cash on February 26, 1932, in rural Kingsland, Arkansas. When he was three, his family moved to Dyess, Arkansas, a place now associated with his name. Dyess was a New Deal settlement built by the Federal Emergency Relief Administration for poor families displaced by the Great Depression. After high school, he worked briefly in a factory in Pontiac, Michigan, but that was not to his liking. He joined the U.S. Air Force in 1950, at the age of eighteen to become a Morse Code operator. After basic and technical training, he was stationed in Landsberg, Germany where his musical abilities started to take shape building on the fundamentals of guitar music and gospel singing he had learned as a youth. He performed for friends with a little band they called the Landsberg Barbarians.

After the Air Force, he married Vivian Liberto, a girl he had met in the early days of his time in the Air Force, and with whom he had corresponded while he was in Germany. The young couple moved to Memphis, Tennessee. He soon found work selling household appliances but played part time with guitarist Luther Perkins and bassist Marshall Grant, The Tennessee Two (later the Tennessee Three, with the addition of W.S. Holland). Cash decided to test his fortunes with a developing recording company in Memphis, Sun Records, owned by Sam Phillips. He auditioned singing gospel music at first, but it was his rockabilly style that helped him get his foot in the door with Phillips.

When he began his performing career he adopted the stage name of Johnny Cash. His recordings of Hey Porter and Cry, Cry, Cry won him recognition in country circles. Folsom Prison Blues, I Walk the Line, and Home of the Blues brought him greater fame. He then switched from Sun to Columbia Records. Don’t Take Your Guns to Town was a big hit with Columbia, but then an earlier recorded song with Sun Records, So Doggone Lonesome, also took off and made the charts simultaneously. His circle of professional contacts that date from the Sun Record days include Elvis Presley and Jerry Lee Lewis.

Early in his career, Johnny Cash started drinking heavily and using drugs. This was a dark and extended chapter in the Cash story. His wife of twelve years, Vivian, divorced him in 1966. Two years later he married June Carter of the Singing Carter Family. She was instrumental in helping him combat these destructive habits, even though he had periodic relapses. His alcohol and drug abuse fit in with the outlaw image he cultivated with Waylon Jennings, Willie Nelson, and Kris Kristofferson. Johnny Cash was arrested on seven occasions but never spent time in prison. However, prison-concert albums ( Johnny Cash at Folsom Prison and Johnny Cash at San Quentin) and songs such as The Starkville City Jail led some to believe he was an ex-convict and added to his maverick reputation.

He always wore black and presented himself as a somber and humble man. June Carter was the strong, positive influence in his life. They called Hendersonville, Tennessee their home, and Johnny loved his semi-personal retreat, a 19th century farm in Bon Aqua. By all accounts, their marriage was a remarkable love story. After June died on May 15, 2003, Johnny evidently lost his reason for living. He died less than four months later on September 12, 2003.

In spite of his personal troubles, Johnny Cash proved to be immensely influential in the entertainment world, adding television host, actor, author, and social commentator to his list of accomplishments. Besides his singing career, he appeared in several films, authored or co-authored three books and was an activist for Native American causes. Additionally, he recorded for public purposes the entire New Testament from the King James version of the bible.

His deep, bass-baritone voice captured attention and made him one of the top selling performers of all time. His record sales topped ninety million over his lifetime. His stardom spread around the world and brought him invitations to the White House on numerous occasions. Johnny Cash is now a member of The Tennessee State Hall of Fame. This is one more in a long list of honors that include The Country Music, The Rock and Roll, the Gospel, and the Memphis Music Halls of Fame.