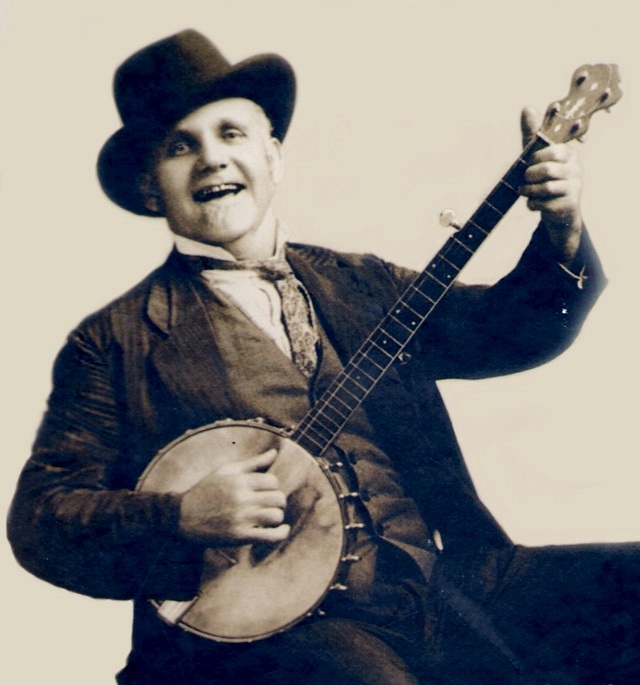 David Harrison “Uncle Dave” Macon was the first superstar of the Grand Ole Opry, performing there for over twenty-six years. He was born in Smartt Station, Tennessee, but lived most of his adult life near Murfreesboro. Uncle Dave was the first country music star to gain fame as a Grand Ole Opry member, recording artist, and successful touring act. A renowned banjoist and songster, he sported a large black hat and a big Tennessee smile while picking his banjo and singing of the people and country he loved. Uncle Dave was inducted into the Country Music Hall of Fame in 1966, thus cementing his status as a country music immortal.

David Harrison Macon was born at Smartt Station, Tennessee, on October 7, 1870. At a young age, he learned the guitar and played alongside his sisters on the family piano. The Macons were hardworking entrepreneurs, but by 1883, hard times forced them to move from Warren County to Nashville to seek new opportunities.
The Macons operated a large hotel on lower Broadway, a popular stopover for musicians and traveling shows. The entertainers fascinated young Dave with their stage personas, costumes, and musical talents. One night Dave was mesmerized by a trick banjo player at a carnival show and asked his mother to buy him a banjo. She obliged, thus starting Dave’s lifelong relationship with the five-string. Dave’s father was killed during a street brawl on lower Broadway in October 1886, and within a year, the Macons moved to Readyville, Tennessee. Dave stayed in Nashville for a few years, but eventually joined the family in Rutherford County. He helped his mother run a large, country inn, where his first public performances for pay occurred. Dave played in a local string band and diligently studied the music of the region, including mountain tunes, ballads, black music, and sacred hymns.

Dave married in 1899, moving to the nearby Kittrell community. Seeing a need for local, commercial transport, he soon opened the “Macon Midway Mule & Mitchell Wagon Transportation Company,” which he operated for twenty years. Dave and his wife raised a large family of seven sons, and he became a devoted member of the Methodist Church. At the same time, Dave began to perform at public events in Rutherford County and throughout the region. He was a popular draw at political rallies, business openings, auctions, and religious revivals.

In 1920 the debut of cargo trucks put an end to Dave’s freight hauling business. The change allowed him to pursue a music career in earnest, even though he was already age 50. His big break came while performing an impromptu show in downtown Nashville, which resulted in a contract with the Loew’s Theater chain. It was at this time that he adopted the name “Uncle Dave,” a trademark meant to engender a close, familial relationship with his fans. His popularity spread to other southern states, and in 1924, Uncle Dave travelled to New York City for his first recording session. Over the next two decades, he recorded 217 songs during fourteen commercial recording sessions, thus preserving a large body of traditional American music. Among his greatest hits was “Keep My Skillet Good and Greasy,” “Rock About My Sara Jane,” “Travelin’ Down the Road,” and “Hold That Woodpile Down,” as well as the hymns “How Beautiful Heaven Must Be” and “Walking in Sunlight.”
WSM radio invited Uncle Dave Macon to join its new Grand Ole Opry program in early 1926, a move intended to enhance the show’s status. Over the next two decades, he became recognized as “The Grand Ole Man of the Grand Ole Opry.” As Uncle Dave’s popularity spread, he toured nationwide. Nothing was more important to him than entertaining, and he had a gift for connecting with his audiences. His shows were a flurry of action and raw excitement, filled with songs, jokes, physical stunts, social commentary, homespun wisdom, and evangelical preaching. Confident in any entertainment venue, he travelled to Hollywood in 1940 to star in the film Grand Ole Opry. During the strife of the Great Depression and World War II, Uncle Dave’s fans could attend a show or listen to him on the radio, and for an hour, forget about their own troubles while enjoying a good laugh or a word of encouragement.

Uncle Dave’s popularity waned as new musical talent emerged, and after World War II, he became an opening act for Roy Acuff, Bill Monroe, and others. Declining health all but stopped touring in 1949, but he still played on the Opry. His final performance occurred at center stage at Ryman Auditorium during the live Opry broadcast of Saturday, March 1, 1952. Suffering from cancer, Uncle Dave fell ill at the end of his performance, and the following day, he was admitted to the hospital in Murfreesboro. After lingering for three weeks, he passed away on March 22. The funeral service the next day was one of the largest in Tennessee’s history, and Uncle Dave was laid to rest at nearby Coleman Cemetery. He was inducted into the Country Music Hall of Fame in 1966, and today his legacy continues with the “Uncle Dave Macon Days” music festival, held each year in Murfreesboro.