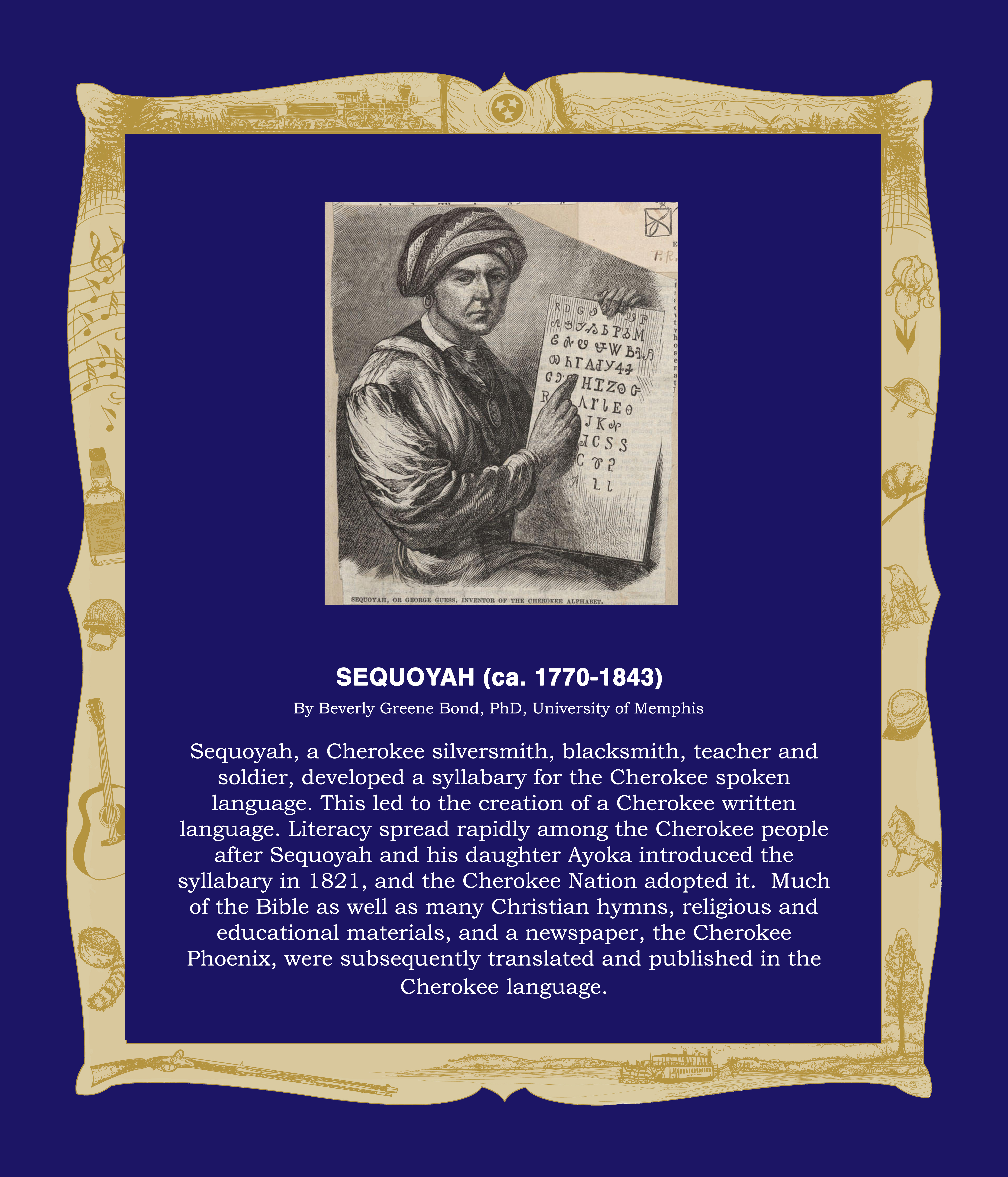 Cherokee oral tradition suggests that Sequoyah first became fascinated with the ability of whites to communicate by making marks on paper while recuperating from a hunting accident in 1809. During this period of contemplation and study, he became convinced that these "talking leaves," as they were called by many Native Americans, were the key to the power of whites and must become a critical component in the future progress and success of the Cherokees.

Sequoyah became further convinced of the necessity of literacy for his people during service as a soldier on the side of the United States in the War of 1812 and the Creek War of 1813-14. He and other Cherokee soldiers were unable to write letters home, read military orders, or make diaries and journals of events. After those experiences, he began in earnest to create a Cherokee written language. His convictions that a written language would greatly benefit his people in a rapidly changing world was not readily accepted by all Cherokees. Despite ridicule by friends and family members, and accusations of insanity and practicing witchcraft, Sequoyah devoted the next decade of his life to creating "talking leaves" in his native tongue.
By 1821 Sequoyah had isolated eighty-six (later reduced to eighty-five) syllables used in the spoken Cherokee language and assigned written symbols to each. Unlike the English writing system, where different letters can represent the same sound (for example, "c" and "k" can both represent the same sound as in "can" and "kill"), each letter in Sequoyah's syllabary represented a distinct sound. This brilliant innovation meant that any Cherokee who simply memorized the sounds of the symbols could automatically read or write anything in the Cherokee language.

In 1821 a demonstration of the system by Sequoyah and his daughter Ayoka to Cherokee leaders was so dramatically convincing that the syllabary was officially adopted by the Cherokee Nation. Within five years, thousands of Cherokees were literate-far surpassing the literacy rates of their white neighbors. Sequoyah had single-handedly invented the first written language of native North America.

While this brilliant linguistic achievement was rapidly recognized throughout the western world, Samuel Austin Worcester (1798-1859), a missionary to the Cherokees from the Congressional Church, was instrumental in making the new Cherokee syllabary suitable fo printing. Serving from 1825 to 1826 in the Brainerd Mission in Tennessee, Worcester was convinced that the use of native languages was a significant way to propagate the gospel. At this urging, a hand printed press and Cherokee syllabary characters in type were prepared in 1827 by the Missionary Board and shipped from Boston to Cherokee leaders in New Echota, Georgia. On February 21, 1828, the inaugural issue of the first Native American newspaper, the Cherokee Phoenix, was printed in parallel columns in Cherokee and English. Using Sequoyah's syllabary, the Cherokee Nation and missionaries published newspapers, almanacs, government documents, religious tracts, hymn books, and the Christian Bible in this new written language. By 1843, the year of Sequoyah's death, more than four million pages of books, articles, and newspapers had been published in Cherokee.

While perhaps no other legacy can match the millions of printed pages preserving Cherokee history, culture, tradition, and sense of nation, many other honors have been bestowed upon Sequoyah for his remarkable achievement. As early as the late 1840s, Native Americans and other concerned individuals made concerned efforts to create a new State to be Sequoyah between Arkansas and Oklahoma City. While the U.S. Congress finally rejected that accolade in 1906 (partly as a result of lobbying efforts by oil and gas interests who feared complications dealing with Native American governments), Sequoyah's name has been remembered in many other fashions. His name is attached to the giant redwood trees of California, a county seat in Oklahoma, a presidential yacht, and a nuclear power plant near Chattanooga. Perhaps most significant to the memory of his achievements, however, are the statue standing in our nation's capitol and the Sequoyah Birthplace Museum constructed by the Cherokee on the shored of Tellico Lake at Vanore, Tennessee.