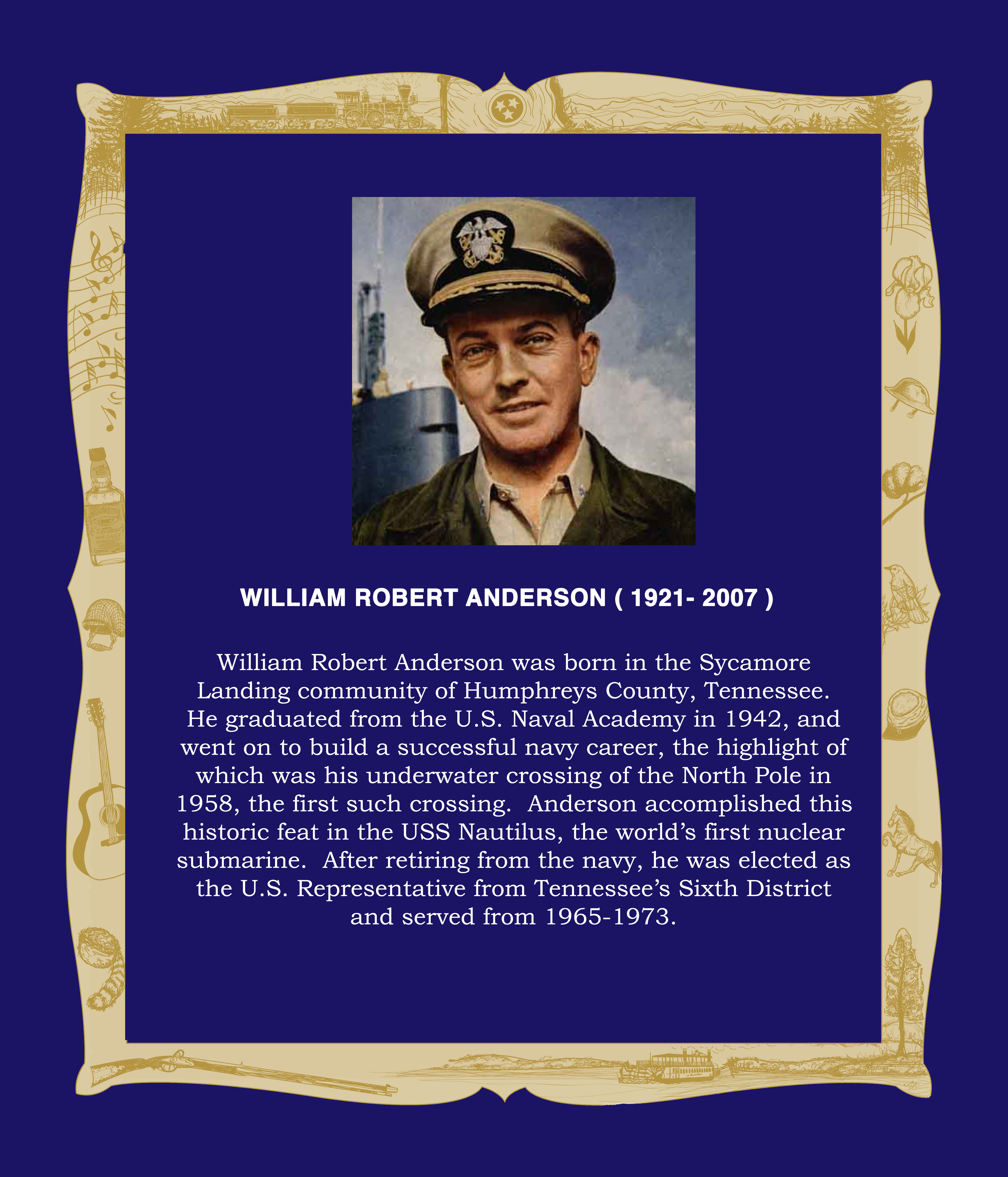 William R. Anderson, U.S. Navy captain and congressman, is best known as the commander of the submarine USS Nautilus during the first underwater crossing of the North Pole in 1958. Anderson was born on June 17, 1921, in the Sycamore Landing community of Humphreys County into a family distinguished by prominent farmers and political leaders. In 1942 he graduated from the U.S. Naval Academy. He received the Bronze Star and other combat awards for eleven submarine patrols in the Pacific Ocean during World War II.

After the war Anderson became a protégé of Admiral Hyman G. Rickover, the "father" of the navy's nuclear submarine program. In 1957 he received the command of the USS Nautilus, the world's first atomic-powered submarine. Few people knew Anderson's route the following summer when his ship left Pearl Harbor on a six-thousand-mile voyage to Great Britain. On August 3, 1958, the Nautilus crossed under the geographic North Pole, climaxing the first undersea voyage in history from the Pacific to the Atlantic by way of the ice-blocked Arctic region. Passing four hundred feet beneath the polar ice cap, the ship's crew conducted important scientific measurements and mapped the ocean floor in a previously unknown part of the world.

Commander Anderson and his crew received a hero's welcome and a ticker tape parade on their return to New York City. Their successful polar crossing, in the view of many Americans, helped to offset the Soviet Union's Sputnik achievement of the previous year. At a special White House ceremony President Dwight D. Eisenhower presented Anderson with the Legion of Merit.

In 1962 Anderson retired from the navy after twenty years of service and embarked on a campaign for governor of Tennessee. Surprisingly, for a political novice with no financing, he ran a respectable second to Governor Frank Clement and garnered more than twice the number of votes of the Republican challenger. Anderson's congressional career began in 1964 when he was elected representative from Tennessee's Sixth District, which included his home county of Humphreys. He did well in this conservative rural district, serving four consecutive terms despite being tagged as a liberal for his criticism of FBI Director J. Edgar Hoover and his staunch opposition to American involvement in Vietnam.

Anderson retired from public life after his defeat in the 1972 election. He now lives in Florida with his second wife, Patricia Walters, and their two children. Captain Anderson is one in a long lineage of Tennesseans who have won fame for their military exploits and gone on to distinguished careers as elected officials.