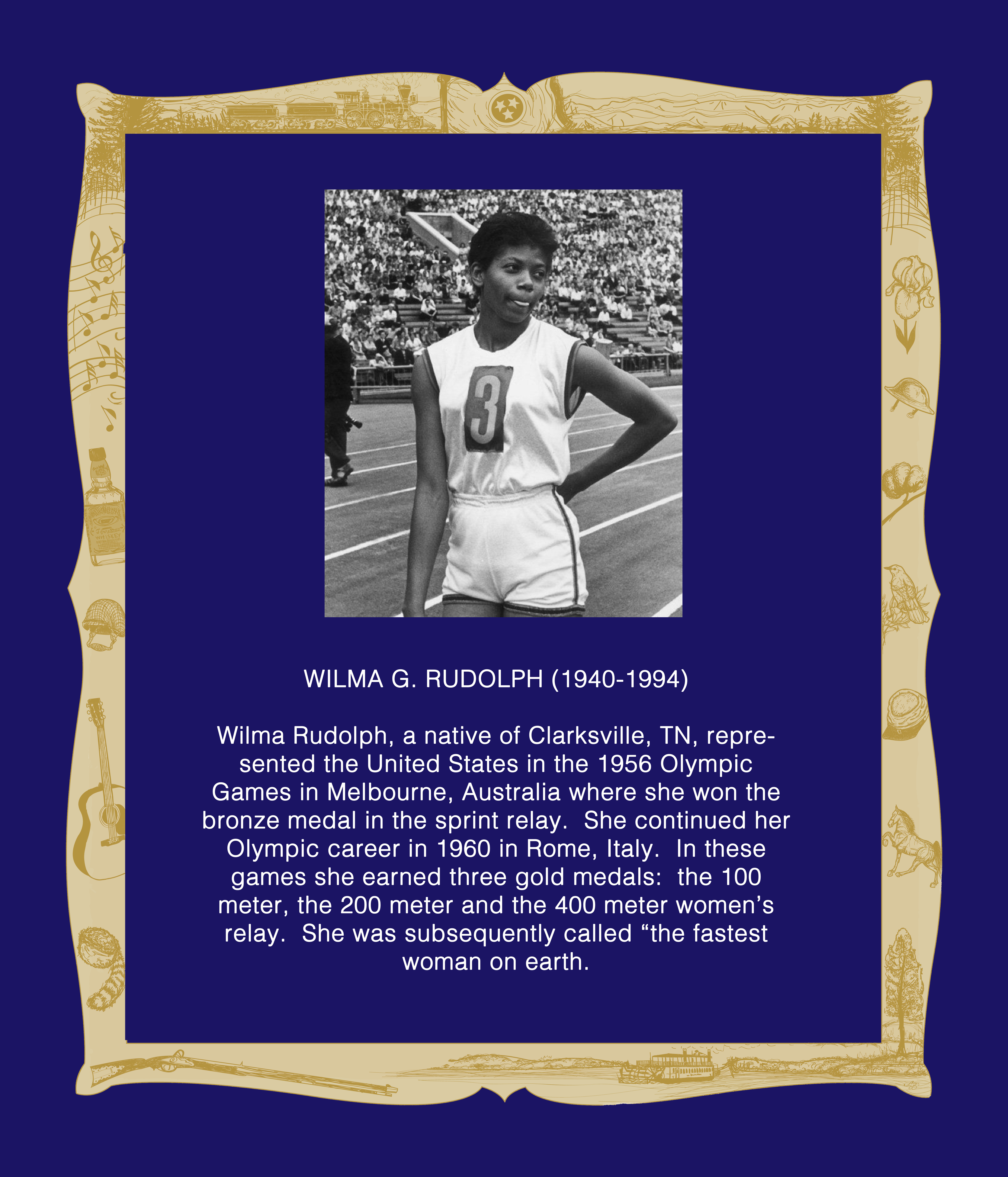 Wilma G. Rudolph, the twentieth of twenty-two children, was born June 23, 1940, in Clarksville. Her father, E. D. Rudolph, already had fourteen children when he married Wilma's mother, Blanche. Wilma Rudolph suffered a number of childhood diseases before contracting polio; she wore leg braces from age six until she was ten years old. In early 1955, when serving as a referee for a Clarksville basketball game, Tennessee A&I State College women's track coach Edward S. Temple saw Rudolph and invited the fourteen-year-old, skinny-legged basketball player to attend his summer camp. In 1956 Rudolph and five other Tigerbelles qualified for the Olympic team, returning to Nashville with several medals and plaques. In 1959 Rudolph accompanied the team to the Pan American Games, where they also won several medals. At the 1960 Olympic Games in Rome, Italy, Rudolph won three gold medals, prompting Coach Temple to proclaim, "I was so happy I was bursting all the buttons off my shirt."

In 1961, the year her father died, Rudolph won the James E. Sullivan Award and visited President John F. Kennedy. The next year, she retired from track and field and completed goodwill tours abroad before returning to Clarksville to marry Robert Eldridge. Although she was America's first female star athlete, Rudolph's life was "no crystal stair." Rudolph described her life as "besieged with money problems." The expectations of others left her feeling "exploited both as a woman and as a black person.”

In 1992, after ten years in Indianapolis, Wilma Rudolph returned to Tennessee to become a vice-president for Nashville's Baptist Hospital. Two years later, shortly after her mother's death, Rudolph was diagnosed with brain and throat cancer. Thereafter she seldom appeared in public, except for quiet walks around the Tigerbelles' track with retired Coach Temple. Wilma Rudolph died on November 12, 1994, and thousands of mourners filled TSU's Kean Hall on November 17 for the memorial service in her honor. Others attended the funeral at Clarksville's First Baptist Church. Across Tennessee, the state flag flew at half-mast

In her short life, Rudolph became more than an athlete; she was the epitome of the triumphant human being. Her many honors and memorials testify to the respect afforded her by Tennessee's citizens. In 1980 Tennessee State University named its indoor track for her. In 1994 she was inducted into the National Woman's Hall of Fame and received two honorary degrees. A section of U.S. Highway 79 in Clarksville was renamed the Wilma Rudolph Boulevard (1994). Throughout the summer and fall of 1995, several events honored Rudolph's memory: Clarksvillians held the Wilma Rudolph Breakfast in July; TSU dedicated a new six-story dormitory, the Wilma G. Rudolph Residence Center, in August; TSU's Annual Edward S. Temple Seminars on Society and Sports named its annual luncheon the Wilma Rudolph Memorial Luncheon in October; and the Wilma Rudolph Memorial Commission placed a black marble marker at her grave in Clarksville's Foster Memorial Garden Cemetery in November. In April 1996 a life-sized bronze statue of Rudolph was completed for mounting in Clarksville. In 2000 Sports Illustrated magazine ranked Rudolph as number one in its listing of the top fifty greatest sports figures in twentieth-century Tennessee.