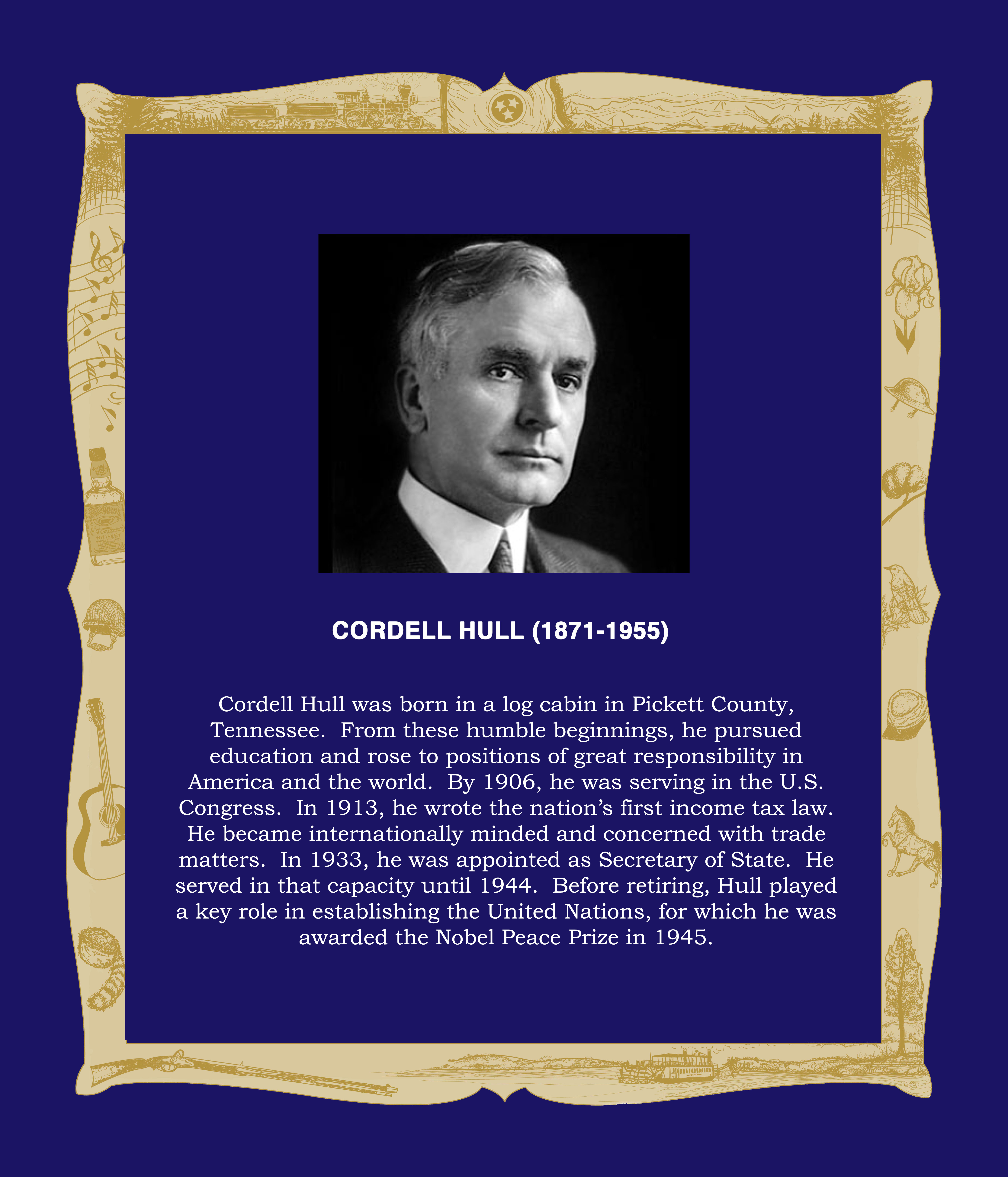 ×
By Jonathan G. Utley , University of Illinois at Chicago

As congressman, U.S. secretary of state, and Nobel Laureate, Cordell Hull had a remarkable career. Born to a poor family in the isolated "Mountain Section" of upper Middle Tennessee, he was educated first at home, then free schools, and, as the family income increased, at private schools. Education took him to law and law to politics. As a politician, Hull was a staunch Democrat and opponent of the protective tariff. When he made his first political speech at age sixteen, it was against the tariff. Twenty years later, he delivered his maiden speech in the House of Representatives on the evils of the protective tariff. Between those events, Hull served his party, won election to the Tennessee General Assembly, practiced law, and became a circuit court judge. Elected to Congress in 1906, Hull earned a footnote in history in 1913 when the Democrats lowered tariffs and turned to this moderate progressive to write an income tax law that was progressive but not too radical.

This parochial, hardworking party man changed during World War I. He had always seen the tariff as a local issue, but the Great War changed his perspective, and he came to believe that world peace and progress depended upon nations having free access to the raw materials and markets of the world. He twice urged his government to host an international conference to establish a postwar economic order. But he was one World War ahead of his time; he would not get his conference until World War II.

Defeated in the Republican landslide of 1920, Hull learned that global issues would not win votes. He turned his attention to his party, becoming Democratic National Committee chairman, and his constituents. He was reelected in 1922 and watched his influence within the Democratic Party grow during the years of the Republican ascendancy. In 1930 he was elected to the Senate and became a supporter of Franklin Roosevelt. In 1933 President-elect Roosevelt asked him to be secretary of state. Hull agreed, seeing an opportunity to establish his free trade principles.

During the first half of Hull's eleven-year tenure as secretary of state, he fostered free trade and promoted the Good Neighbor Policy toward Latin America. He spent the second half of his secretaryship seeking to avoid war and then helping to create a postwar system that would avoid another war. For his efforts in establishing the United Nations, he received the Nobel Peace Prize, but his greatest impact on American policy came from his work on free trade.

In 1933 Americans did not support free trade. The economic nationalists who comprised Roosevelt's "Brain Trust" sought to restore prosperity by managing an economy isolated from the world. Their success in 1933 led to a humiliating experience for Hull at the London Economic Conference. But Hull had survived for a quarter of a century in Washington politics, and he knew how to fight. Through deft political moves, he triumphed over his opposition and escorted through Congress a reciprocal trade agreements program that moved the nation away from its high tariff tradition.

Tariff issues are pretty dull stuff. What won Hull popular acclaim was his work with Latin American nations. At the Montevideo conference in the winter of 1933-34, Hull disarmed South American critics and won popular support for the United States by adopting an egalitarian style, flattering the other foreign ministers, and pledging that the United States would not intervene in the internal affairs of other nations. These successes and the highly principled position he took in dealing with Japan so enhanced Hull's popularity with the American people that he would have been the likely Democratic candidate for president had FDR decided not to seek a third term in 1940.

Though popular, Hull's dealing with Japan was notably unsuccessful in avoiding war. When Japan invaded China in 1937, the secretary lamented the violation of treaties and principles, but believing no vital American interests were at stake, refused to confront Japan. He waited for Japan to crumble under the weight of its war in China. But Japan did not crumble. Instead it sought to expand its control over Southeast Asia and the South Pacific. Japan's objectives were antithetical to the liberal commercial world order Hull so passionately believed in. To Hull this was no petty squabble over trade. He believed that if great powers were allowed to establish exclusive control over the markets and raw materials of large sections of the world, it would destroy the political and economic progress achieved over the last five centuries. Hull urged Japan to abandon its world view. But the Japanese were no more willing to accept Hull's world order than Hull was prepared to accept theirs. When diplomacy failed, war resulted.

During the war, Hull played a marginal role in foreign policy management; Roosevelt personally handled matters of state and ignored Hull. In addition, Hull's health deteriorated. For years, he had been suffering from tuberculosis (a closely guarded secret), and as the disease advanced, the secretary spent longer and longer vacations recuperating. He was not without influence in Washington, however. He forced out Under Secretary of State Sumner Welles, whom Hull believed had been disloyal to him; he kept foreign policy out of the 1944 presidential election; and he played an important role in creating bipartisan support in Congress for the United Nations.

Ill and exhausted by the summer of 1944, Hull remained in office only long enough to see FDR elected to his fourth term. After he retired, his medical condition teetered between serious and stable, but he recovered enough so he could oversee the ghostwriting of his memoirs. Though he kept well informed about international affairs, Hull played no role as an elder statesman. He lived out his years in his comfortable apartment in Washington, never returning to his native Tennessee or to the mountains from which he had sprung. He died on July 23, 1955, and was interred in the crypt of the National Cathedral.